As published on LinkedIn Influencers on April 10th, 2018.

This may sound like the ultimate contradiction, but I hate the word hate. I truly do. I hate the way it sounds. I hate the way it feels. I hate the word hate. And I especially hate the fact that I can’t seem to avoid it these days. Politically and socially this word has seeped into our collective consciousness at an alarming rate, and while a lot of people have spent countless hours debating how we got to this point, I’m personally far more interested in how we move forward from here. How do we bridge this ever widening gap to find common ground and work together to move this country, and the world, forward?

Clearly, this is not an easy question, and as such there are no easy answers, but thankfully there are people who are trying to find a way forward. One such person is Sally Kohn, a political commentator and contributor to both CNN and Fox News, whose book on this very topic is available today. The Opposite of Hate examines the current epidemic of hate and its historical and cultural roots, but more importantly, it offers insight on how we can move past this bitterly divided impasse and learn to work together. I have known Sally for many years, and so when I heard that she would be devoting an entire book to the issue of hate and how we can move past it, I knew I had to pick up a copy. Sally’s writing has previously been published in The Washington Post, Fox News, USA Today, and The Huffington Post, but this is her first full book, and I encourage everyone to pick up a copy for themselves. And if you need a bit more incentive, please check out below some questions I posed to Sally prior to this book’s publication and her insightful responses. I know I’m looking forward to delving into this issue more deeply when my order arrives later today, and I hope I’m not the only one. 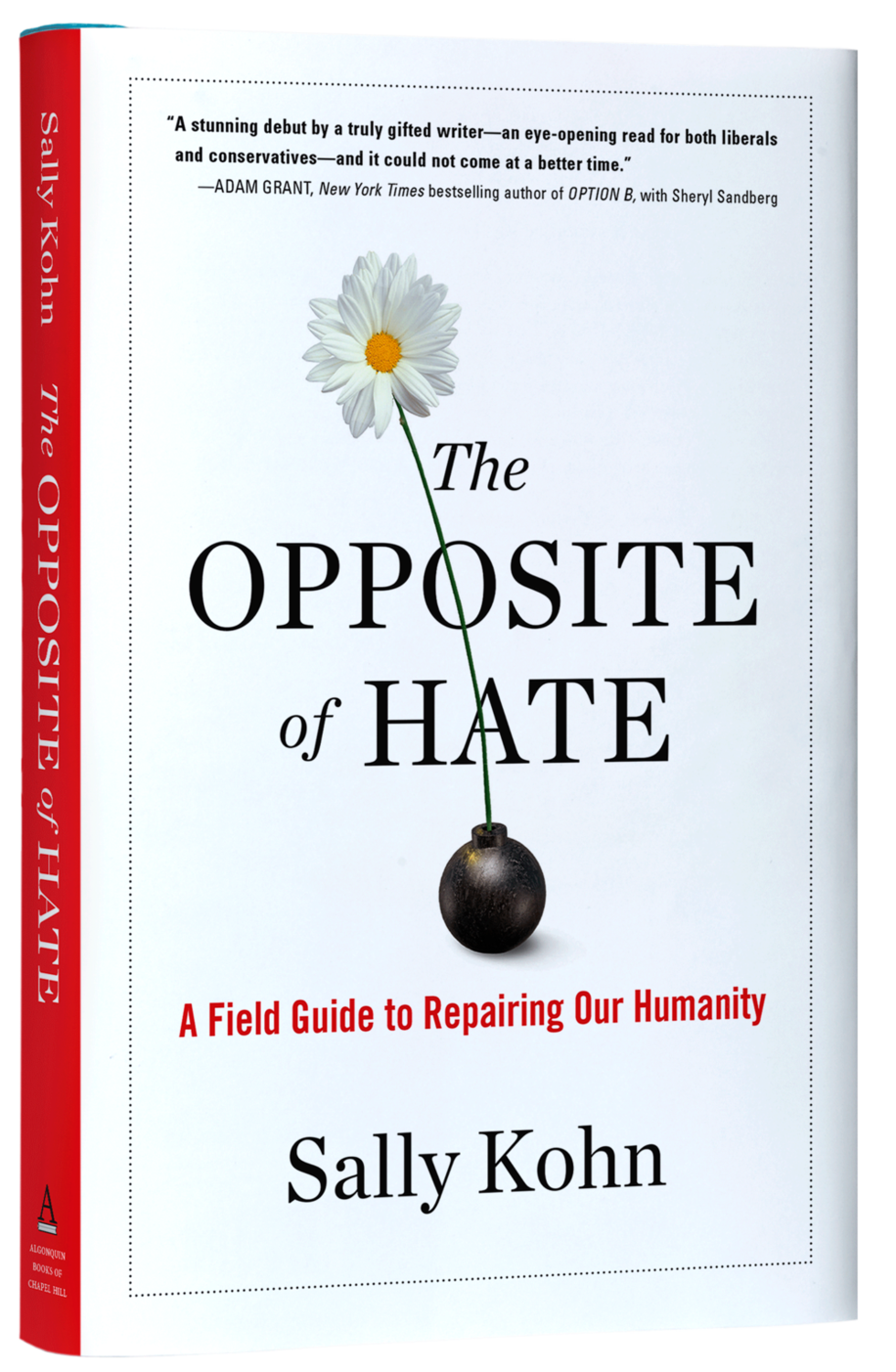 Jacki Zehner: Hate is such a harsh and strong word that I actively avoid using it because of how that word makes me feel, and yet you chose to write a book about it. Why? What made you decide to address this topic at this point in time?

Sally Kohn: I don’t want to sugar coat the hard reality of what we’re facing right now as a species. And there’s no other word for it, really. We have a problem with hate. We hate each other. And it only seems to be getting worse at the moment. Whether we’re talking about racism or misogyny or Islamophobia or anti-Semitism or extreme partisan hate and bias, we have a historical and habitual problem with demeaning and dehumanizing others based on their identities. A problem that has ebbed but more often flowed throughout the history of the United States and the world, which we’ve at times made progress on however imperfectly, but also are clearly still struggling with. Arguably it’s been worse before but still, I don’t think hate needs to be at its worst now to be bad enough that we have to do something about it.

JZ: What is the opposite of hate?

SK: It’s not love. Not for my purposes, anyway. You don’t have to love someone to not hate them. But you do have to understand how we’re all fundamentally connected as human beings, how in spite of our differences and disagreements — which, by the way, I think are incredibly important and even worth celebrating — we’re still more alike than not and have more in common than not. And we all want a world that’s less divided and less cruel. And the way we get there is recognizing how we’re connected, and studies show when we connect with people outside our own bubbles, the people we think of as “other” we hate them less. The opposite of hate is connection.

JZ: I love that answer and I could not agree more. The opposite of hate is connection. Thank you. So how did pursuing this topic change you and your worldview?

SK: You’d think that writing a book about hate would be really depressing, and of course parts were, especially coming to terms with our profound history and capacity for cruelty. But honestly, I walked away from the process of writing this book feeling more optimistic about humanity than ever. Sure we have the ability to hate, but we also have the ability for stunning kindness, for forgiveness to a degree that I never thought imaginable, for seeing the best in others in spite of every excuse not to. When I met former terrorists and ex-neo Nazis and people who had participated in heinous genocides who had somehow managed to leave entire lives of hate behind, that left me feeling more inspired and hopeful about human beings than I ever imagined possible. We all have the capacity for great hate, but we also all have the capacity for its opposite — and, to me, it’s that positive possibility that makes us all so remarkable and full of promise.

JZ: You have spent a lot of time working as a social and political commentator on various news channels. What is your take on the current state of our news media? How has the relationship between the news media and the government changed since the last election?

SK: I’m deeply worried about the state of truth and fact in our world today, which I still believe in the power of journalists to defend and promote, but has obviously been deeply undermined. And in addition to each of us as individuals standing up for facts and real news, there’s a role that government I think needs to play in working with the media, in a cross-partisan fashion, to make sure that we the people have access to the facts and information our democracy needs. In addition, I also worry that the news media helped create this moment in part by sliding away from an emphasis on reporting toward over-emphasizing opinion and debate — a dynamic, by the way, I still play into. And I think it’s important there be spaces in media for discussing and debating opinions. At the same time, I worry when news media starts to borrow too much from sensational reality television… and then we elect a reality TV star President and it comes full circle.

JZ: Increasingly, Americans are dividing up and self-sorting themselves into groups and spaces where we are constantly surrounded by people who think alike and hold the same opinions as each other, particularly in the online spaces. What are the dangers of this division? How do you think this is effecting our ability to engage and connect with people who think differently about important issues?

SK: I’m an opinionated person. I literally have opinions for a living. That’s my profession as a commentator and columnist. So I want to be clear that I don’t think the problem is people having deeply held convictions and beliefs or even defending their perspectives. I think the problem is when we do so by demeaning and even dehumanizing those who don’t agree with us. And divisiveness — both conceptual and in real life — just makes the problem worse, because it’s easy to be mean to people you don’t know. And more and more of us don’t know people, don’t live around people, don’t work with people, who hold different views than we do. And then we reinforce those bubbles in the news we consume and the social media we follow. Which is why connection is the answer — making sure you have friends outside your political bubble, or at the very least following smart thinkers on social media who come from the other side of the political spectrum. And then learning how we can disagree without resorting to or reinforcing hate.

If you read this, love your thoughts in the comment section. Have a wonderful day.