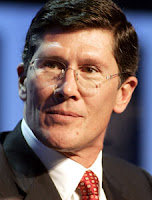 I have purposefully not written anything about John Thain since he left Merrill, but now that he has chosen to speak out, so will I. I had the honor of working for John for my entire 14 year career at Goldman. Early on he co-headed the mortgage securities department where I was a trader, and at the end of my tenure I worked directly for him in the executive office. He truly is a quality human being and it broke my heart to read the stories that were being written about him regarding his departure from Merrill. I did not believe half of what I read and I am happy that he finally chose to speak out about what really went down. Every Merrill employee that I have spoken to since he joined that firm said they thought he did a great job. At Goldman John had a stellar reputation, and was known for his strong worth ethic, his integrity, his raw intellectual ability and his compassion. I cannot imagine how challenging it was to come in to the head role at Merrill when he did, but I am sure he did the job to the best of his ability. Was he perfect? No… but tell me someone who could have done better.

For a must read OPED the Bank of America/ Merrill merger I encourage you to read this piece that appeared yesterday in the WSJ. ( the same day as above) So much trust has been broken and it is hard to imagine how we are going to build it back. There are going to be books written about how this deal got done and the whole truth is yet to come out.

I am off again, this time to Atlanta for the Women’s Funding Network conference. Sorry the blogs have been few and far between as heaven knows there is MUCH MUCH to write about.