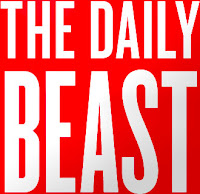 Yes that it the headline this morning on the DAILY BEAST – one of the most viewed news sites on the net this Sunday morning. Almost two years ago I decided to throw myself out there and write publically about issues I care about. When I saw the article last week in the Sunday Times about Lloyd saying that Goldman is doing “God’s Work”, how could I not respond? Especially given that I am married to a pastor and we were both Goldman Partners.

Even though I left Goldman seven years ago, I will forever be a partner of the firm, and for that reason and many more I continue to care deeply it. For years I gave speeches on the firm’s culture, the firm’s structure, and actively recruited countless young people to 85 Broad Street. I was a corporate cheerleader to the utmost degree, and for that reason and my trading profitability, I was promoted. Becoming a partner changed my life forever, and that of my husband, because ultimately it gave us enough money to commit our lives to non-profit work and of course, our family. For us, what we recieved was enough, more then enough, and we will be forever grateful. My husband returned to school and to get his masters of divinity and is now an associate pastor at our church in New Canaan CT. In fact he just ran out the door as he is preaching this morning on change. He has worked passionately for nine years for our church, and because of GOLDMAN, can do so without getting paid. Thank you Goldman. My passion is for women and girls. I have written on this often on this blog but I as believe that a key factor in our world becoming a more just and equitable place is greater gender equality. I serve on many non-profit boards and increasingly have given speeches, appear on television, and write about why we need more women in positions of leadership and power. ( … and more) Thank you Goldman. I can give you a very long list of other people that have ‘retired’ to serve the world BECAUSE, in part, of the culture we experienced while at Goldman.

So yes I had to write this piece, and I am so gratefuly that my friends Rev. Katharine Henderson, President of Auburn Seminary, and Rev. JC Austin could write it in partnership with me. Greg would have been up for the task too if he did not have to write his guest sermon this week. So Lloyd YES I am challenging you because I know you are up for the challenge. Goldman’s reputation has been damaged and you need to do something about it, and something BIG. This in the best interest of your people and your shareholders. I suggested in a earlier blog post that it should be around job creation, economic security and financial literacy, and this “Virture Fund” could target just that. As the piece says, I expect more of Goldman Sachs because it is my recollection from my time ( 14 years) there that Goldman Sachs and it’s people have always expected more of themselves.

So since it is Sunday, and we are talking about God, and I am a Christian I will end with a prayer, something I have not done on this blog before – “Dear Heavenly Father. The world is not a fair place, but we know that you are fair. So many people, your people, your children, are suffering and we pray you hear them and you comfort them. We pray today that you will help us all choose actions that will make this world better. We pray that you CHANGE our hearts to hear the cries of others, and that will drive our actions. We pray that you make us all generous people, because you are so generous with us. We know you expect a lot from us because you know what we are capable of. We know that you tell us that to those to which much is given much is expected. We know that it is in serving that we will find our peace and our joy. We pray this in your name – Amen.

Have a great Sunday.