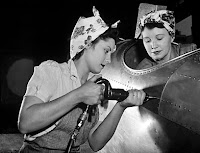 Thank you to those who might have turned in to CBS Evening News on Friday and of course did not see the segment on the lack of women on wall street. It got bumped. It should air this week and rather then blast around another email to announce it, I will wait and send around the link. CBS has been GREAT and I thank them again for their interest in the story.

One of my favorite reads every week is the editorial by Alan Abelson in Barrons. I have been reading it since my first days at Goldman in the 80’s. This week he provides some sympathy for the Bears out there and provides a very funny and enlightening commentary about the unemployment report. ( read it here)
He first takes issue with the birth/death ratio which has always been troublesome to me, then he moves on to dissect the report. “The most that can be said for it is that it wasn’t as awful as the previous month’s-except that the unemployment rate jumped to 9.7%, the highest in 30 years….Some 466,000 unfortunanates got the ax and there are now 14.9 million people out of work, 7.4 million of whom have lost their jobs since the recession began in Deceomber 2007.”
Another issue which he addresses is the fact that this recession is being labled a ‘mancession.’ I spoke to this issue earlier in the year on CNN after an unemployment number came out showing that men are disproportionately losing their jobs relative to women. One of the reasons is of course the fact that the industries being hit the hardlest were construction and finance, male dominated fields, but the issue is much deeper as Mr. Abelson points out. He suggests that the growing participation of women in the workplace is part of a “long term trend, and we suspect that its recent acceleration reflects a fact of economic life, namely that women are still paid less and tend to occupy less remunerative jobs. A perverse advantage during a recession as to who gets fired and who does not.” Perverse indeed.
The underemployment of women is an important economic issue going forward, as is the inequality in pay, and I worry both this issues are not getting addressed appropriately in the recovery plan. Both government and private companies must not lose focus on their long term human capital management strategies, especially as it relates to hiring, retaining and promoting women. With women now “50% of the workforce”, 60% ish of undergrads, and the ones who make the vast majority of purchasing decisions, male dominated companies stand to lose if they do not adopt more equitable and inclusive business practises.
My last fav quote comes on page 14 of Barrons and it is from David Rosenberg from Gluskin Sheff, also commenting on the unemployment report and the recent stock market rally, “namely the 50% rally in the face of a 30% decline in earnings from earlier estimates.” He says” I’m not being purposely bearish,” he says of his caution. “I view it as almost a public service.”
Have a great day. PS – Keep watching the US dollar. Big moves happening… Gold too.