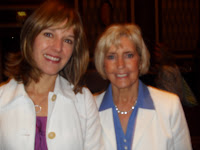 Thursday morning I was one of over 2000 people ( mainly women ) dancing through the doors of the New York Hilton hotel to the beat of Grup Gringo Capoeira USA. The event was the annual breakfast in celebration of the work of the New York Women’s Foundation (NYWF), a public philanthropy started 22 years ago to “be a voice for women and a force for change.” Their primary purpose is“to help low-income women and girls in the five boroughs to achieve sustained economic security through expanded opportunities.” I have been and will continue to be a supporter of this organization, and I encourage you to be as well. If your goal is to help make New York City a more just and equitable place to live, I cannot imagine a better way to do it. (they are a member of the Womens Funding Network)

The room was overflowing with political leaders of the city and state, celebrities, committed donors, women leaders of all ages, first timers, and GOOD men. The theme of the morning? Investing in women and in their future, is one of the best ways to build a more just and equitable world.

The Honorees included Ambassador Swanee Hunt for her lifetime of work, but also in special recognition of her leadership role in starting the “Women Moving Millions Movement”, which as mentioned here the day before, just announced they had raised $176 million dollars for women’s funds. Abigail Disney in her intro called Swanee “ bold and visionary and unaccepting of the status quo.” In very colorful language for so early in the morning she said Swanee has the biggest set of jewels, brass balls, cahones (is that a word?) and finally LIFE POUCHES of any woman she has ever known. Swanee humbly took the stage and with a southern smile the size and sweetness of the great outdoors she responded that she was reminded of a quote from Golda Meir that says “Don’t be humble; you are not that great.” Wrong Swanee… you are truly great.

Next up was Governor Patterson talking about the needs of this state and praising the work of the NY Womens Foundation followed by the award presentation to Lilly Ledbetter. If you do not know her story, then please read this and this. The words “accidental activist” kept ringing through my ears. He is one of the greatest examples I can think of a woman who responded to her personal circumstance in a way that changed the world FOREVER, for millions. The issue? FAIR PAY. As a victim of work based gender bias she said enough, ENOUGH, and fought the battle to earn rights for others. When women do not earn as much as men for equal work, this has implications not only for her financial security and future, but for her family for generations to come. (pictured right)

We then heard from a young woman, a girl, who at the age of 16 was left for dead on the side of a road by a man who had just hired her for sex. He had beaten her up so badly, breaking her nose, splitting her lip, breaking her bones, that when she was finally able to go to the mirror she did not recognize who she was looking at. She was one of many teenage girls that are commercial sex workers in this city and the organization she credits for helping her put her life back together is GEMS, a grantee of the NYWF. This is why we were gathered there this morning.

Mayor Bloomberg took the stage next I hope in part due to his support of his partners work, Diana Taylor, Vice-Chair of the NYWF. I was later speaking with Harville Hendrix, best-selling author of “Getting the Love You Want” and husband of Hellen LaKelly Hunt, about the next movement being a “couples movement” and we reflected upon what might have been the impact of him and Diana standing up there, hand in hand. Another opportunity missed…… Never-the-less he did a great job, and spoke about the commitment of city to enable NY to become the “easiest city in America to serve (volunteer).” Here all about the new initiative by clicking here. I love it!!!!

Next up, if you can believe it, was Queen Latifah, again being honored for her activism and commitment to the achievement of women’s equality. First as a teenage woman rap artist in a male dominated world she had the courage to stand up against that exploitive culture. She started her own management company because she was not going to hand her career and finances over to someone else, and it is a successful business today. She is such an amazing example to every women, but in particular young women of color, what you can achieve. She announced a brand new and exciting initiative of the NYWF called RISE New York ( Respond, Inspire, Solve, Engage) and she committed on the spot, $10,000.

After another amazing story of a women saved by the work of the foundation the event was closed by the empowering words and voice of Angelique Kidjo, grammy nominee. Angelique was born to sing and if you click here, I know you will agree. I had first heard this amazing woman at an event earlier this spring, the annual awards dinner of the National Council For Research on Women. She is truly a force of nature. Raised in a family with seven brothers and 3 sisters in Africa with a mother she describes as knowing how to raise good men she was blessed to have a father who was a man that knew “love cannot be a jail but rather love must set the woman free.”

So what can you do with all this information? Here is a list.

1) Support the New York Womens Foundation.
2) Buy Swanee Hunt’s book – The Half Life of a Zealot
3) See Abilgail Disney’s Movie – Pray the Devil Back to Hell
4) Read about the Lily Ledbetter Fair Pay Act and talk about it with every person you know.

5) Support GEMS and save a young girls life.
6) Volunteer and encourage everyone you know to as well. For NYC click here.
7) Buy and read one of the many books by Harville Hendrix and make your love relationship all it can be, then bring that passion to your philanthropy as a couple!
8) Read about and support this new initiative of the New York Women’s Foundation – RISE New York.
9) Buy Queen Latifah’s music for you, your daughter, heck every woman you know and go see every movie this fabulous woman is in.
10) As above for Angelique Kidjo – buy here.
11) LAST BUT NOT LEAST – This Thursday I will be speaking at an event hosted by the Harvard Womens Business Alumni Group with Ana Oliveira, President of the New York Womens Foundation, and Chris Grumm, President of the Womens Funding Network. Our discussion is entitled “Invest in Women: Why and Why Now.” You can sign up to attend by clicking here. Chris and Ana are two of the most amazing women on this planet so do not miss this opportunity.
Have a great day!