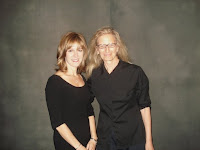 Yesterday at 2pm I was standing on the stage at the Brooklyn museum having my photo taken by Annie Liebowitz. (right) It was surreal. I was standing there, in a line, with some of the most amazing women on the planet. The photo will end up being one very, very long image of the majority of the donors that participated in the first stage of the Women Moving Millions Campaign. The initiative was conceived three years ago by two incredible women in that line up, Swanee Hunt and Helen LaKelly Hunt. With a large gift to fund the campaign they imagined raising $150 million for Womens Funds around the world. They imagined bringing in and bringing together women of means to fund grass roots women leaders. They imagined that women would see the power of women giving collectively to bring about the change they wanted to see in the world. They set a BOLD goal not knowing that the global economy was soon to go tumbling off a cliff. They started inviting and I am sure at times, convincing, women around the world that YES they could give at this level. They chose to partner with the Womens Funding Network, an organization I am honored to serve on the board of, because they wanted to create a donor partnership. Sally Roesch Wagner a historian on the suffrage movement addressed those gathered at the museum, dressed as Elizabeth Caty Stanon, saying that never in history have women done this.

At the press conference the Hunt sisters announced that they had surpassed the goal, and have raised over $175 million dollars for Womens Funds. $175 million. Thousands and thousands of lives will be forever changed because of the vision of these two amazing women. And this is only the beginning…….

I am honored, I am humbled, I am without words to describe what the past 36 hours have meant to me. I shared with my 9 year old daughter that I witnessed history in the making, and it is all about making the world a more just and equitable place for little girls in this country and around the world, just like her.