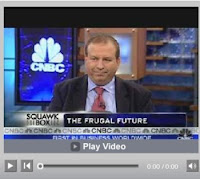 David is one of my favorite investment and economic thinkers. Below are some recent thoughts too good not to share.

“There are five things we have learned over the past month

1. Whenever the S&P 500 slices to a new low, it’s time to cover shorts. Every new low in the past 18 months was met by a vigorous bounce, especially the last two.

2. Be wary of upward spasms where financials and consumer discretionary lead the way, because they typically go into these bear market rallies with the largest short positions. Also, be skeptical when the rally is led by low-quality stocks.

4. There seems to be confusion between an actual improvement in the economy and an improvement relative to the post-Lehman trend, when the economic indicators began to implode at annual rates of 30%-70%. Even Wily Coyote hits the ground at some point.

5. The profits recession is two-thirds of the way through; there is another one third to go. Equity investors pay for profits, and with one-third of the downturn still ahead of us, it is difficult for us to be excited about any sustainable rally in stock market.”