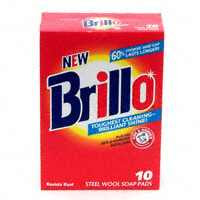 Thanks for all the lovely emails and posts (Facebook) about my latest CNN appearance this morning. Some of you have been sending me your list of the various uses of BRILLO pads, which are very funny. When I was looking for a soapbox this morning before I jumped in the car that was all I could find to fit in my handbag. They are soappads! I brought them because what I thought we were going to talk about this morning was a broader conversation about leadership and money. I was going to get on my soapbox that the President and his sidekicks have to be much more thoughtful of how he (they) talk about money: how we use it, invest it, spend it, give it and save it AND who has it. The conversation was to be a response to this piece in the WashingtonPost – “A Week of Revelation” by Michael Gerson. The CNN producers had wanted to bring up the topic of ‘class warfare’ to the panel of ‘experts.’ Personally, I was particular miffed with this line in the NYTimes earlier in the week saying “the Affluent are top on the President’s list of Losers.” I can hope to understand why people are upset at the ‘rich’ but last time I checked ‘rich’ was something most people wanted to be. Yes the rich spend their money sometimes unwisely and many have made it in ways that have caused other people harm, BUT just as many, and I think more, employ people, run and built businesses, make sound investments, give away big dollars, and together pay the lion’s share of personal income taxes. There is no one ‘rich’ and ‘rich is bad/money is bad’ is a message that we could do with out. Period. Most I know that are of means are accepting of paying higher taxes but they don’t want rotten tomatoes thrown at them at the same time. One would hope that the President sees ‘the rich’ as part of the solution and not only the ’cause’ of the problems. He needs to encourage those that can most afford to do it to spend, invest and give to help get our economy out of this mess. I have not heard that in a speech lately….. I vaguely remember the President Elect saying we are all in this together or was he only talking to the 98% of the population that make less then $250,000 a year.
A friend who I asked to read the OPED sent me these comments – “It is true that income inequality has increased over the recent past. But it is also true that the wealthy have paid a larger share of total Federal personal income tax revenues. Higher tax rates on the wealthy will reduce after tax income inequality. The important question is whether higher tax rates and perceived hostility to success will also reduce absolute tax revenues. If that happens, Obama’s budget is unsustainable. Even if we don’t reach the point of diminishing returns immediately, it seems clear that we will get there relatively soon as the social security and Medicare liabilities mushroom with the aging of the baby boom.

There are no responsible budget projections that suggest that this nation can pay the amounts of social security and Medicare entitlements created under current law. Yet, rather than address this directly, and reduce the entitlements as it is clear we must, the politicians rail against the wealthy and suggest that higher taxes on them will solve the problem, knowing full well that it won’t. We demonize mortgage bankers who put homeowners into mortgages that would be a challenge to repay. How should we view politicians who lie and encourage us to rely on benefits that they know can’t be paid.”

On another note I have to highlight my friend Bethany’s latest article. She just published a great piece on the private equity shop Fortress called “Over The Hedge”. After making the move from FORTUNE where she was forever she is making her mark at Vanity Fair. You go girl… Click here for the article.