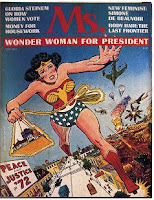 OH MY GOSH! If you know me personally, or have been reading my blog you know that I collect Wonder Woman memorabilia including the very first issue of Ms. Magazine with Wonder Woman on the cover. You also know that I wrote a leadership principal called “Be A Superhero” and I think this year is going to be all about women, and in particular SHEros! You might also know that I quit my job at Goldman Sachs in part because I had an idea for a screenplay where WW became President. You would also know that I gave a speech a few weeks ago to a group of 200 women with a WonderWoman T-shirt on calling for a revolution. Calling for women to reclaim the word Feminism! Calling for women and men to work together to create a more just and equitable world for everyone. You would also know that my dear friend Deborah Siegel wrote the book Sisterhood Interrupted which bridges the intergenerational gaps of feminism and is a MUST READ for anyone who hopes to understand why so many women do not relate to the term. What you may not know is that I reached out to the editor of Ms. Magazine last week after meeting with Sara Gould of the Ms. Foundation to ask her to think about re-releasing that issue (pictured) as a special edition in its original form because the stories read as true today. (scary…) You might also know that I am deeply, deeply, frustrated with the lack of progress we, as women, have made in this country. Ok… with all that you have to read this piece from the Daily Beast by Amy Siskind today!!! ( thanks Deborah for sending it to me)

As excerpt – “Witness the rebirth: the start of the fourth wave of the women’s rights movement, a big tent movement that invites women and like-minded men of all political parties and views on reproductive rights. A women’s movement that stands up and speaks out for the women of this country when other groups will not. A women’s movement that keeps a watchful eye on its constituency and their needs. It is time that we take back the term “feminism” and restore its dignity and honor. It is time that we, our daughters, and granddaughters discover our inner Wonder Woman.And, for those of us who dream, maybe Ms. and the former national women’s movement will return in the sequel as Superwomen once again.”

Fourth Wave? I am there. I am so there……………… With an army of women in their WW t-shirts. I have already bought 60 and if you want to get yours here is the link. I already called them about ordering in lots of 100 and we could get a 35% discount of the $28 face value! Get yours before they sell out and tell them Jacki sent you.