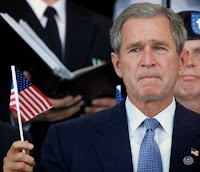 To start on a positive note – how happy am I that Slumdog won Best Picture – Golden Globes? VERY! As I wrote the moment after I saw the movie, it was the best! Click here for my review.

Last night my husband and I saw Frost/Nixon and it is another must see. What an amazing adaptation of a story, and one with little dramatic arc and a known outcome. The screenwriter Peter Morgan did an outstanding job and I am glad to see he is being acknowledged for it. The story was in many ways the opposite of Slumdog which was all about hope and possibility. Frost was a story of celebrity, power, desperation and brokenness and I found it chilling, especially against the backdrop of what is going on right now in our country.

Though I was not planning on it I turned on the TV this morning just as President Bush was saying his final good-byes. Needless to say I have not been a big fan. I do however lift him up with what he chose to be some of his final words… he asked that people show the Office of President respect. That we treat one another, as human beings, with more respect. I like that. Yes we might not deserve it, but it is still the right way to treat people.

As he walked off the stage President Bush had the look that Frank Langella, as Nixon, so brilliantly displayed last night on the big screen at the end of the movie. A look that no longer screamed “I am the most powerful person on the planet”, but rather, the opposite. A look that said “I am defeated and have to go on living the rest of my life with that knowledge.” Both images were very powerful and I will not forget either one for a while to come.