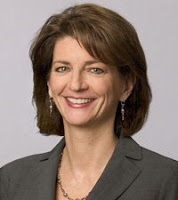 How I spent my whole day yesterday was truly my idea of a good time! I spent it in a room with approximately 300 successful businesswoman, listening to some of our countries top women leaders ( and a few men too) talk about what is going on in the world, how they are managing it, and what is coming next! The speakers included Brenda Barnes (CEO of Sara Lee – pictured here), Cathie Black ( President of Hearst Magazines), Andrea Jung (CEO of Avon), and Cokie Roberts. ( Political Analyst for ABC News and NPR). The day was hosted by Morgan Stanley and I would like to say THANK YOU for this important conversation and for making Women’s Leadership Visible!!!!

What were some of my main take-a ways? (It is hard to be brief given I have 30 pages of notes..but…)
– Women are there managing and leading in many organizations but there are few places where there is critical mass. We need to collectively figure out where, in what industries, we can get there and move in to those spaces to really see what female leadership looks and feels like.
– Who is CEO matters greatly. The direction of the company and the culture is heavily influenced by who is running the show. The values and priorities of that leader trickle down and seep in to every crack of an organization.
– Leadership in the times of crisis is about knowing where you are going, staying calm and focused, and relentlessly communicating!
– As a worker bee think about being essential to your organization. Be a problem solver and keep a great attitude.
– The general economic conditions for business are bad , everywhere. These CEOs are focusing on cutting costs and serving their customers well.
– We talked about many of the big problems out there: the failing auto sector, our growing budget deficits, the lack of availability of credit, rising unemployment, how to stop the slide of housing prices…… and so on. There are big problems that are not going to go away any time soon. The solutions are there but they are going to involve some tough choices and pain.
– Many speakers mentioned how much excitement there is around Senator Obama’s victory globally. They see it as very good for the US longer term.
– There was clearly a bunker down mentality in the room but there was also optimism and hope.

When people asked me what I did for a living I gave many of them this answer – I am helping to lead a women’s leadership revolution. As a woman leader I am worried about the state of the world and I believe that it is in the power of women working together that solutions lie.

One thought on “Leadership In Difficult Times – A Women’s Perspective”