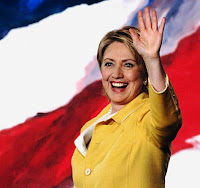 I recieved this letter in my inbox this morning from Illana Goldman, President of the Women’s Campaign Forum, regarding Hilary Clinton and I thought it was well worth sharing.
“I say this to you almost daily, but since it’s normally to you on the TV screen, I thought I should find a way of saying it where you might actually receive the message: Thank you.
Thank you for what you have done. For your sheer tenacity, strength, and stick-to-itiveness. Thank you for working so hard every day when you must have been exhausted. For showing us what leadership looks like: doing something well, with grace, in good times and bad. Most of all, I thank you for not quitting.
Your many supporters will tell you what your race means to them and history will write what it means to the world, but it also means so much to me and to the little world I live in. I thank you on behalf of the women who have been so special in my life:
For my daughter – who is, as of yet, just an idea in my mind. But I imagine her one day reading the story of this historic campaign. I am so grateful that the story she will read will be of a complete campaign, with the biggest numbers possible – states, votes, and delegates. That story will show that our first woman presidential contender was truly competitive – nearly won competitive – and show a little girl her own vast possibilities in this country. Thank you for giving her a history worth reading.
For my mother – who is one of those women who work tirelessly to support her family, worries over rising healthcare costs and frets that her grandchildren may not have social security. She’s always been passionately interested in politics, but never before found a politician who she felt saw and understood her. She’ll be 65 next year and she wrote the first political check of her life to you. Thank you for validating the day-to-day concerns that she faces.
For my grandmother – who was, as it was noted at her memorial, “a woman ahead of her time.” I think of her every time I see one of your senior women supporters who were born before women first got the vote and were out on the streets filled with hope that they would inaugurate one in their lifetimes. Thank you for showing them that their efforts to make women loud and proud actors in American politics created real change.
For my best friend – who would listen to me talk about just about anything in the world for hours – except politics – until you started to run. Little by little, day by day, she became more engaged in your campaign and what it meant to the country and our place in the world. She started out reading your emails and went on to lobbying her husband and friends to change their votes. Thank you for awakening an incredible woman to her role in the political process.
For my former junior staffer- who did not necessarily believe that sexism was still an issue alive and well today. She watched pundit after pundit behave in ways that even she could not deny were … crude. Then she saw it pass as kind of acceptable. And then she saw it happen again and again. Finally, she took up her pen and now Chris Matthews and the MSNBC brass know her name …. well. Thank you for reminding her of how much work we all still have to do.
For me – who has been, at times, described as direct, forward, forceful, pushy and a few other choice adjectives. Thank you for helping make the world a little safer for aggressive, ambitious women. Because isn’t aggressive just one way of saying “she gets things done” and isn’t ambition just another word for “dream?” Thank you for pushing for my dream – and that of so many others – to elect a phenomenally talented and capable woman to lead our country and change our world.
As you promised from the outset, you have, and will continue to, make history.
Thank you, for all us. “
Sincerely,
Ilana Goldman
President, Women’s Campaign Forum